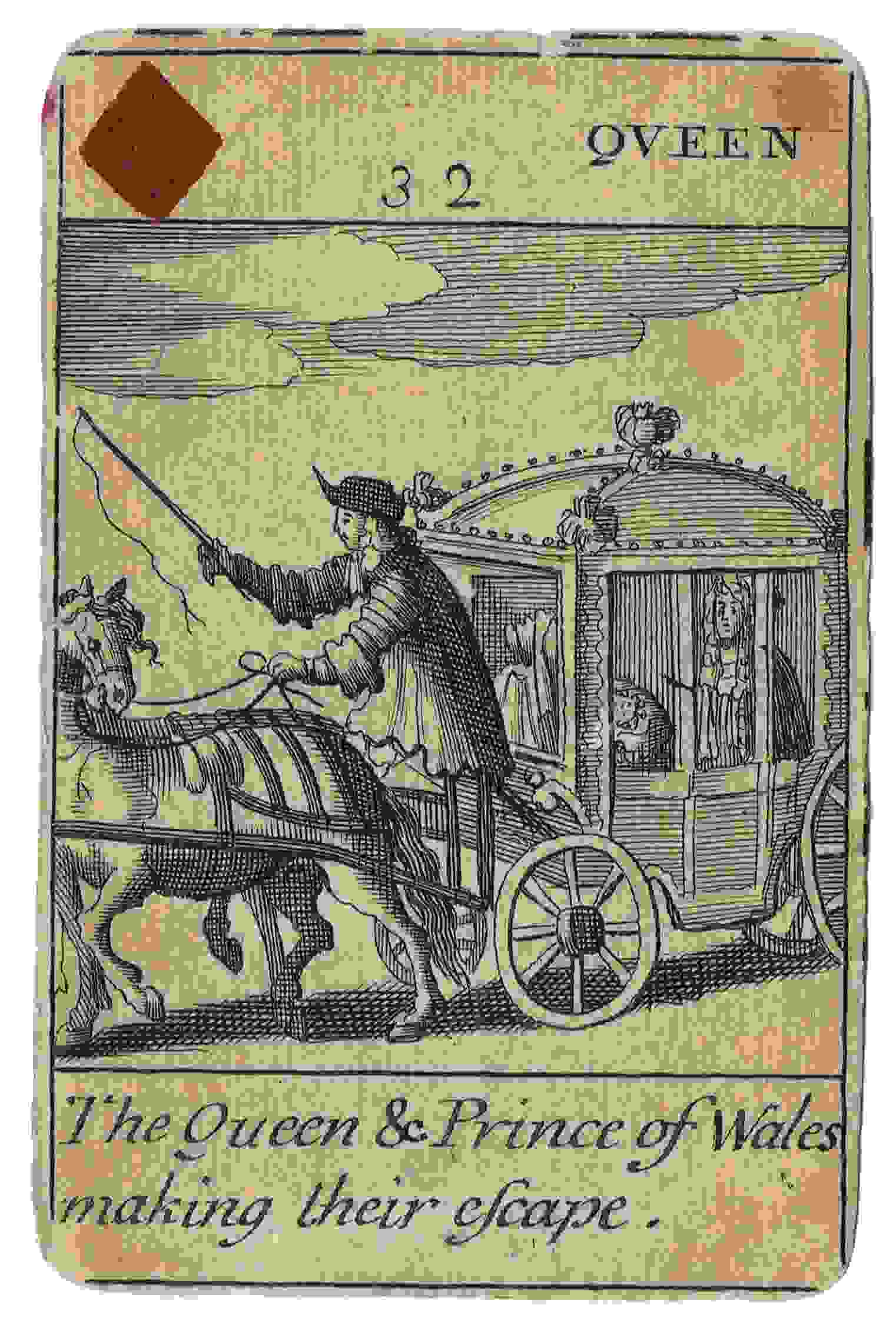 J Whiting describes the 'Revolution pack' as the second in a series of packs illustrated by Francis Barlow covering events, prior to, during and post the Reign of James II. This set published c.1689 is particularly rare and only a couple of complete sets are known to exist, one being held by the British Museum.

In summary, the events of the 'Glorius Revolution' of 1688 are as follows: at the end of June 1688, seven leading statesmen invited William of Orange, the effective ruler of Holland, to come to Britain with an army "to rescue the nation and the religion" from the catholic rule of James II. What finally goaded the statesmen to commit high treason was the recent birth of James's son and heir, whom they feared would be raised as a Catholic. William was chosen to save the nation because he was a Protestant and was married to James's eldest daughter Mary. He readily accepted the invitation for, as champion of the Protestants in Europe and principal opponent of Louis XIV of France, he was keen to add England's wealth to his own resources.

On the 1 November 1688 William left the Netherlands and sailed down the English Channel, landing at Brigham on 5 November. His reception was cool, although not hostile, but as he marched towards London, his ranks grew and support for James melted away. Before the end of the year, William was in London and James was in exile in France.

After the Revolution, parliament agreed to settle the throne jointly on William and Mary and grant executive power to William. The two monarchs also accepted the Declaration of Rights, which was embodied later in the Bill of Rights. The principal terms of this keystone of the British Constitution were that no Catholic could become king or queen; taxes were not to be raised without the consent of Parliament; and no laws were to be dispensed with without Parliamentary approval.

William and Mary ruled jointly until the death of Mary in 1694, after which date William ruled by himself until his death in 1702. William's main aim throughout his life was to contain French expansion in Europe.

Queen Anne was to succeed her brother-in-law, William of Orange, in 1702.

A few more cards from this fascinating deck are shown below..

J.R.S Whiting, A handful of History published by Alan Sutton in 1978.