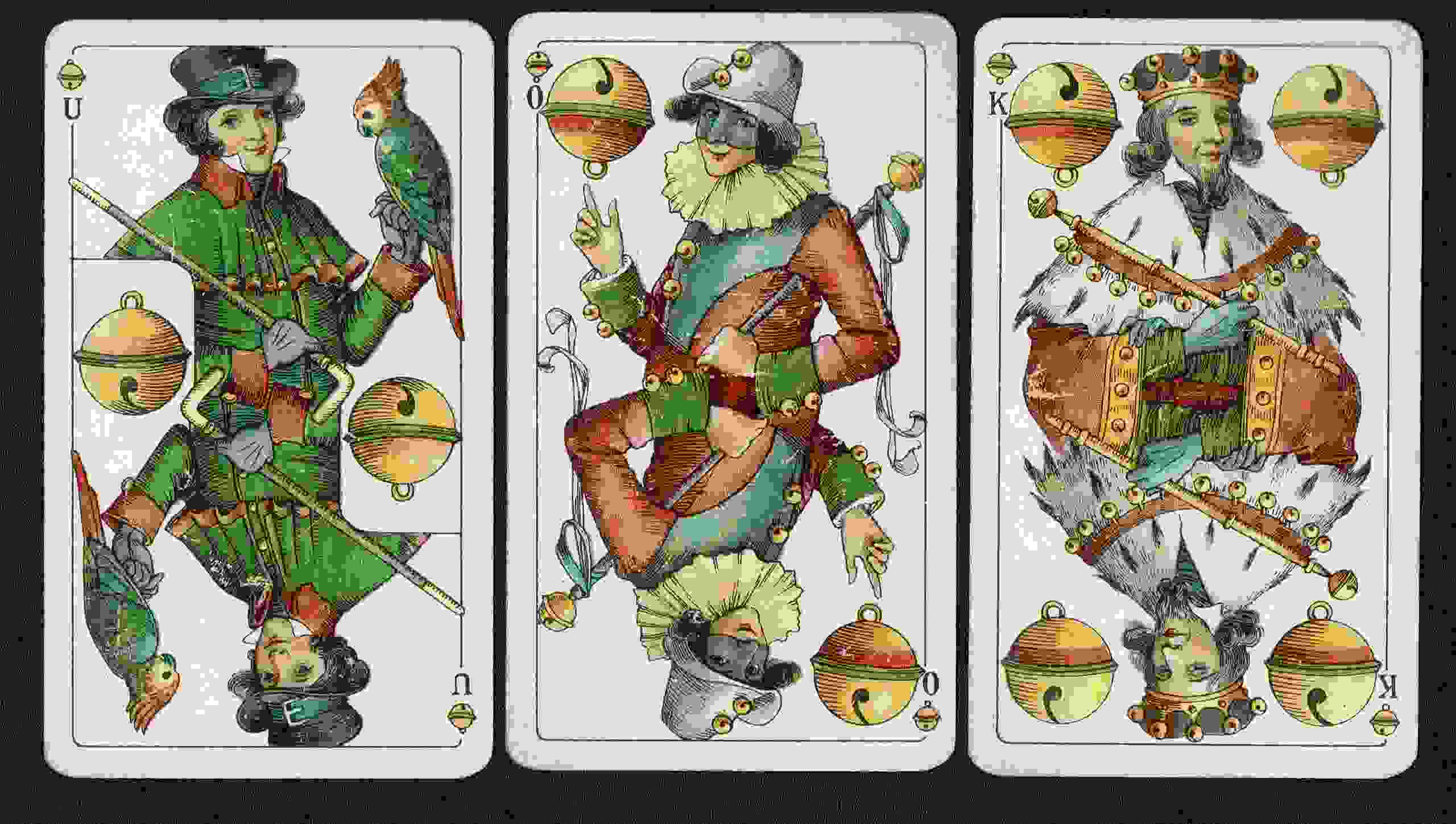 History of B. Dondorf, Frankfurt

The firm of B. Dondorf was founded in April 1833 by the lithographer Bernard Dondorf, who headed the company until July 1872. In that year, Dondorf's sons Carl and Paul, as well as his son in law Jacob Fries, assumed control of the firm which continued to operate under the original trademark. Jacob Fries left the firm in the early part of 1890. In 1906 the firm became a limited liability company, the principal stock remaining in possession of the Dondorf family.

From the beginning, the company specialised in all branches of lithography. In cooperation with the printing firm of C. Naumann, Dondorf also printed paper bank notes for the Italian National Bank and for the Imperial Japanese Government. In 1871, the firm moved within Frankfurt from the Saalgasse to a new and larger factory site in the Bockenheimer Landstrasse 136. The steady growth of the company required the building of still additional subdivisions in 1890 and 1895.

Principal products of the firm were playing cards, various games, greeting and post cards and various religious prints. Although the production of playing cards quickly accounted for the bulk of all company business, it is not certain exactly when Dondorf began to manufacture pasteboards, but presumably shortly after the firm was established. Originally, the production was largely a matter of handwork. Even the printing was done on hand-operated presses, after which the sheets were stencil-coloured with water colours. Since such colouring was not "fast" and tended to run, the production process gradually changed to chromolithography.

The export of playing cards at Dondorf's accounted for much of the firm's business. The Scandinavian countries of Denmark, Norway and Sweden in the period before World War 1, for example, imported nearly all of their playing cards from Dondorf. Similarly, the Dutch East Indies, now Indonesia were =excellent customers.

Bernard Dondorf, the founder died in his 94th year. He earned an enviable reputation as a lithographer, especially for his technique of etching the stone with a diamond stylus. His special methods of engraving bank notes were also unique.

Dondorf's oldest son, August,  exhibited considerable artistic talent but died at the age of 26. The second son Carl, entered the firm in 1860 at the age of 17 and spent several years in New York. His principal interest was the technical operation of the company and much credit is due to him for the excellent reputation that the Dondorf firm enjoyed throughout the world. In 1925 he was elected chairman of the board of the company. Despite his advanced years, he continued to work daily until the firm was liquidated. The youngest son Paul, restricted his interest to office work. He died in 1904. Other managers were Otto Dondorf, the son of Paul, and Friedrich Bosch. Otto Dondorf died in September 1930.

The over-extension of the firm in terms of products and activities, the unrecovered losses from the period of the First World War and the succeeding years of inflation gradually had adverse effects upon the company as a whole. In 1929 the decision was reached to liquidate the firm. The playing card operation was sold to the firm of Flemming & Wiskott in Glogan which continued to manufacture and sell cards under the name of "B.Dondorf GmbH, Frankfurt". Late in 1933, Flemming & Wiskott sold out to the United Altenburg & Stralsund Playing Card factories of Altenburg (ASS).

Most playing cards produced by Dondorf were identified by factory numbers only. Only a few packs, for example the Shakespeare and the Jubilee, were designated by name.

How the different card patterns evolved and who designed them unfortunately cannot be determined. For with few exceptions it simply was company policy not to reveal this information. After Flemming & Wiskott assumed control in 1929, printing continued from the original plates. Apparently only three new packs, i.e. (packs with new face designs) appeared in the period 1929 - 1933. These were the Hunting pack, c.1930; the Saks advertising packs. 1930 and the Jubilee pack marking the Dondorf centennial in 1933. It is believed, however, that the plates for these packs existed before 1929 or else were furnished by the sponsor, in the case of Saks of New York.

Packs marked "B. Dondorf, Frankfurt (also those with texts in French) most likely were printed before 1906.

Only 3 packs with new designs were issued after 1929.

Late in 1933 the rights to the name of Dondorf playing cards were sold to United Altenburg & Stralsund Playing Card factories of Altenburg (ASS).

Many years ago I advertised in the local exchange & mart, the equivalent of Ebay today to buy any old or unusual playing cards. Much to my surprise I had two calls. The first was someone who had a Hunt & Sons early english deck c.1815 for sale at the rather exorbitant price of £20 which I did purchase. Some  20 years later after reading research by Ken Lodge I discovered it was a mixed deck of cards, but heh, it was my first set of antique playing cards.  The second was from a man selling two sets of Shakespeares Playing cards both in boxes and in good condition for £10. I immediately called round to see him and after taking one look decided that I had to buy them as the printing quality was superb with excellent court cards. It was shortly after acquiring these cards which were published by C W Faulkner that I noticed that their name in gold on the JC had been printed over the name of B Dondorf, the outline of which could be seen just below.  This was so exciting as I had heard of the name of Dondorf through collecting circles but did not own any cards that had been printed by them. This was the start of my long passion for collecting Dondorf playing cards and continues to this day.

C W Faulkner & Co was an important publisher of games, pictorial souvenirs, children's books and postcards. Originally the business was a partnership between Charles William Faulkner and Albert Hilder Scheimer working as lithographers around 1882. The partnership ended in 1885 when Faulkner took over the business. In the 1890's the business changed its name and by 1905 became a limited company. The court pictures originate from original art works by John H. Bacon (1868-1914). I believe the playing cards were commissioned by Faulkner and printed by B Dondorf in Germany and sold from c.1905.

Dondorf themselves, continue to publish these playing cards up until 1925 and listed them as No. 192 in their catalogues.  There are several variants that can be found which can be seen below.,

Luxury Deck No 75 for Adolph Wulff 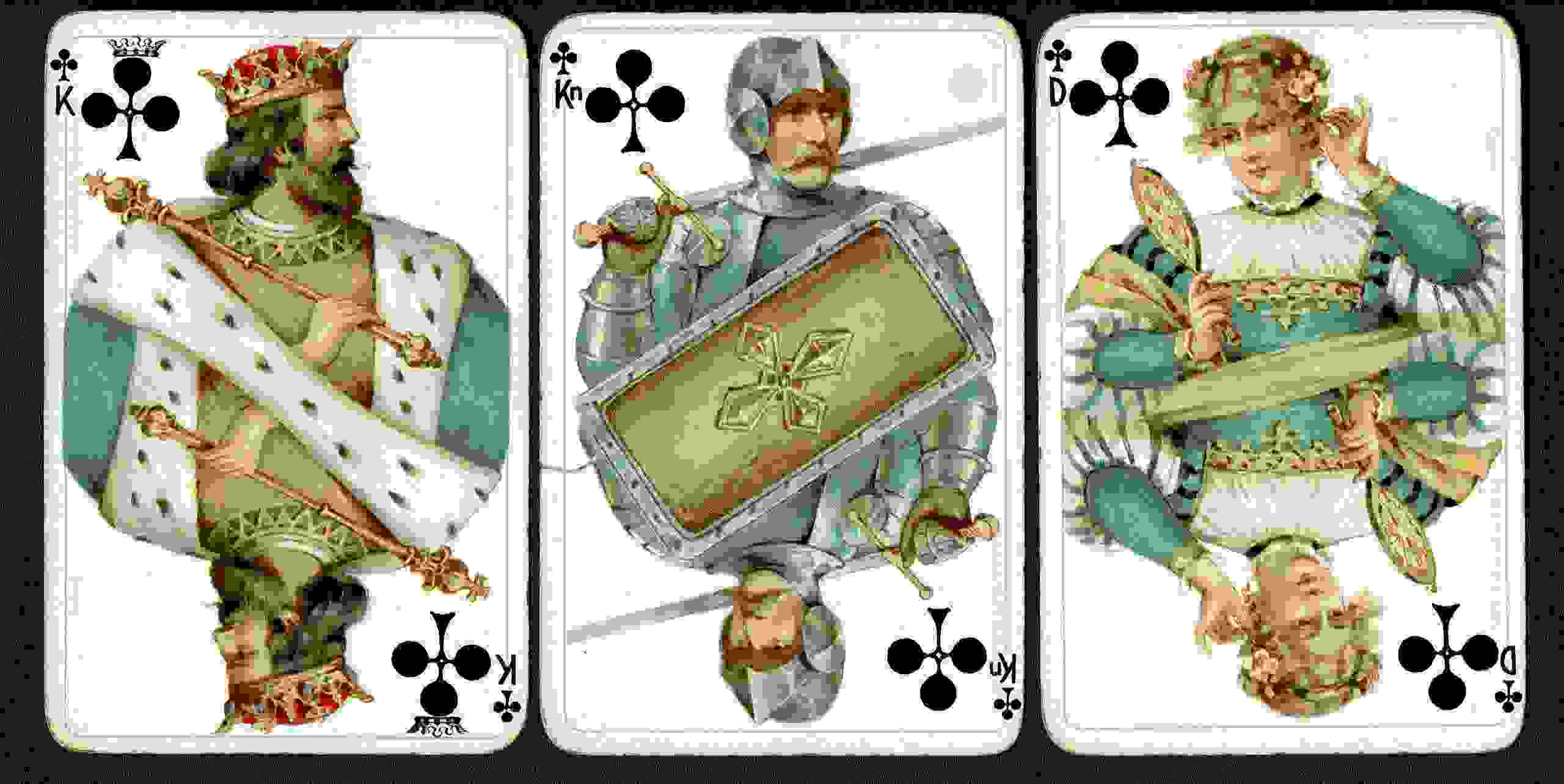 Luxus Spiel No. 75 printed by Dondorf for Adolph Wulff, Denmark

B Dondorf was known to have printed at least 5 decks for Adolph Wulff (1879 - 1948) a publisher based in Copenhagen, Denmark. Braun notes the following decks :

No. 8 with 52 cards and standard court designs

No. 75 Luxury cards (as seen above) with one version without indices and one with and in 40 & 52 card decks plus 1 Joker

The cards have indices common to the Danish market and the name Adolph Wulff, Kopenhagen can be seen on the edge of all the court cards. The word 'Eneret' also can be seen which means 'Exclusive rights' . The back designs are typically of an 'art nouveaux' style with the initials A & W in the centre.

The Königin ode Prinz-Karte first appeared in the Dondorf catalogue c.1928 and was a popular design.

The courts were painted by Hans PRINTZ who was born in in Venice in 1865 and died in Vienna in 1925.

Hans was an Austrian artist and known for his military and historical subjects.

The Dondorf name appears on the Jack or (B) of clubs.

L'Hombre Deck No 60 for Adolph Wulff 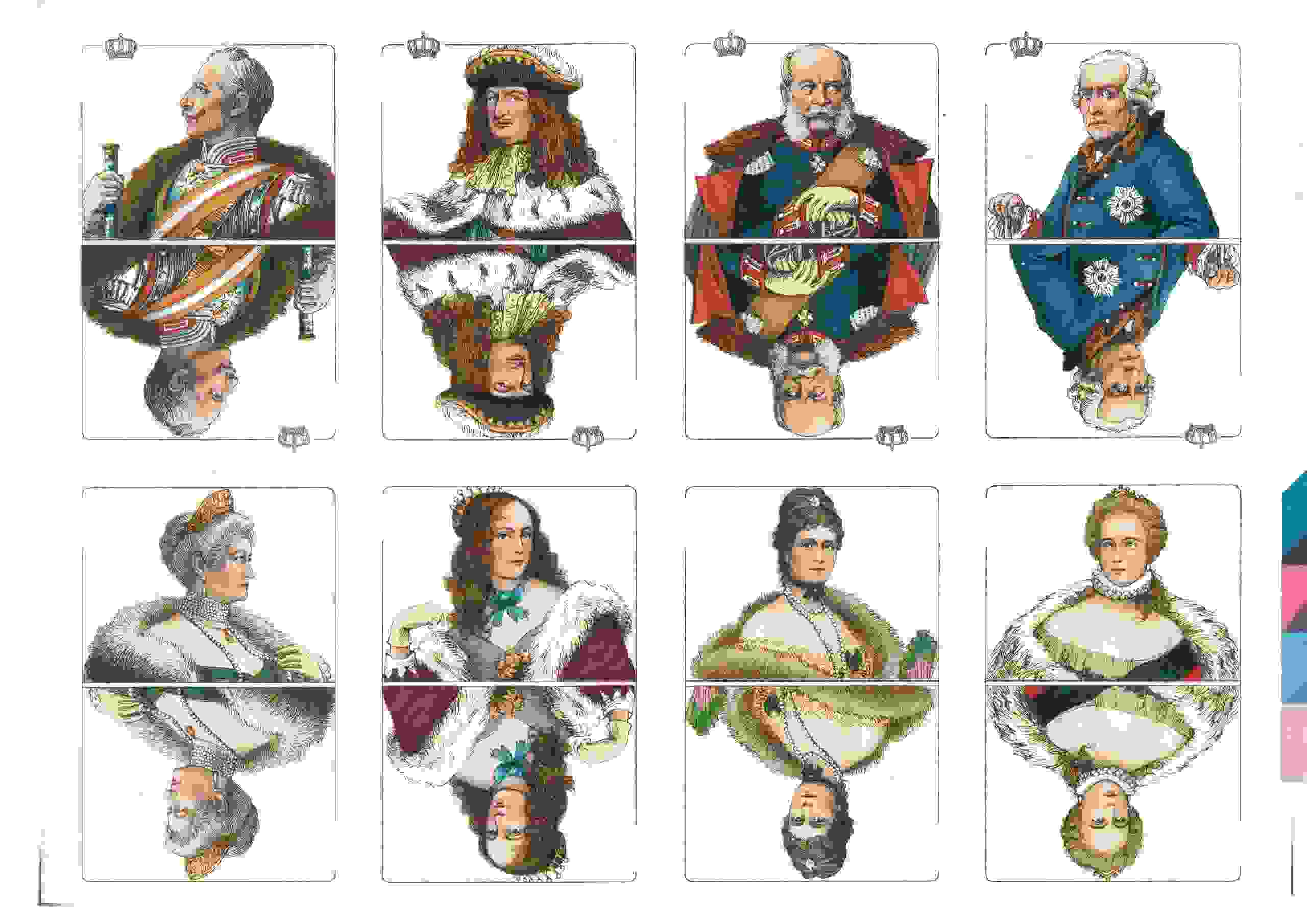 The cards shown here are from a printers proof or test print. Hoffman notes that this deck is very rare. The Kings include The Great Elector and Frederick II and Emperor Wilhelm II is personal. The Queens include the Empress Auguste Victoria. Jacks represent the army and navy with a sailor wearing a cap with the inscription of the imperial yacht 'Hohenzollern'. backs have the coat of arms of the House of Hohenzollern and the slogan "all the way back toll".

The House of Hohenzollern is a dynasty of former princes, electors,kings and emperors of Hohenzollern Brandenburg, Prussia, the German Empire and Romania. The family arose in the area around the town of Hechingenin Swabia during the 11th century and took their name from Hohenzollern castle The first ancestors of the Hohenzollerns were mentioned in 1061.

The Hohenzollern family split into two branches, the Catholic Swabian branch and the Protestant Franconian Branch, which later became the Brandenburg-Prussian branch. The Swabian branch ruled the principalities of Hohenzollern-Henchingen and Hohenzollern-Sigmarigen until 1849, and also ruled Romania from 1866 to 1947. Members of the Franconion branch became Margrave of Brandenburg in 1415 and Duke of Prussia in 1525.

The Margraviate of Brandenburg and the Duchy of Prussia were ruled in personal union  after 1618 and were called Brandenburg-Prussia. The Kingdon of Prussia was created in 1701, eventually leading to the unification of Germany and the creation of the German Empire in 1871, with the Hohenzollerns as hereditary German Emperors and Kings of Prussia. 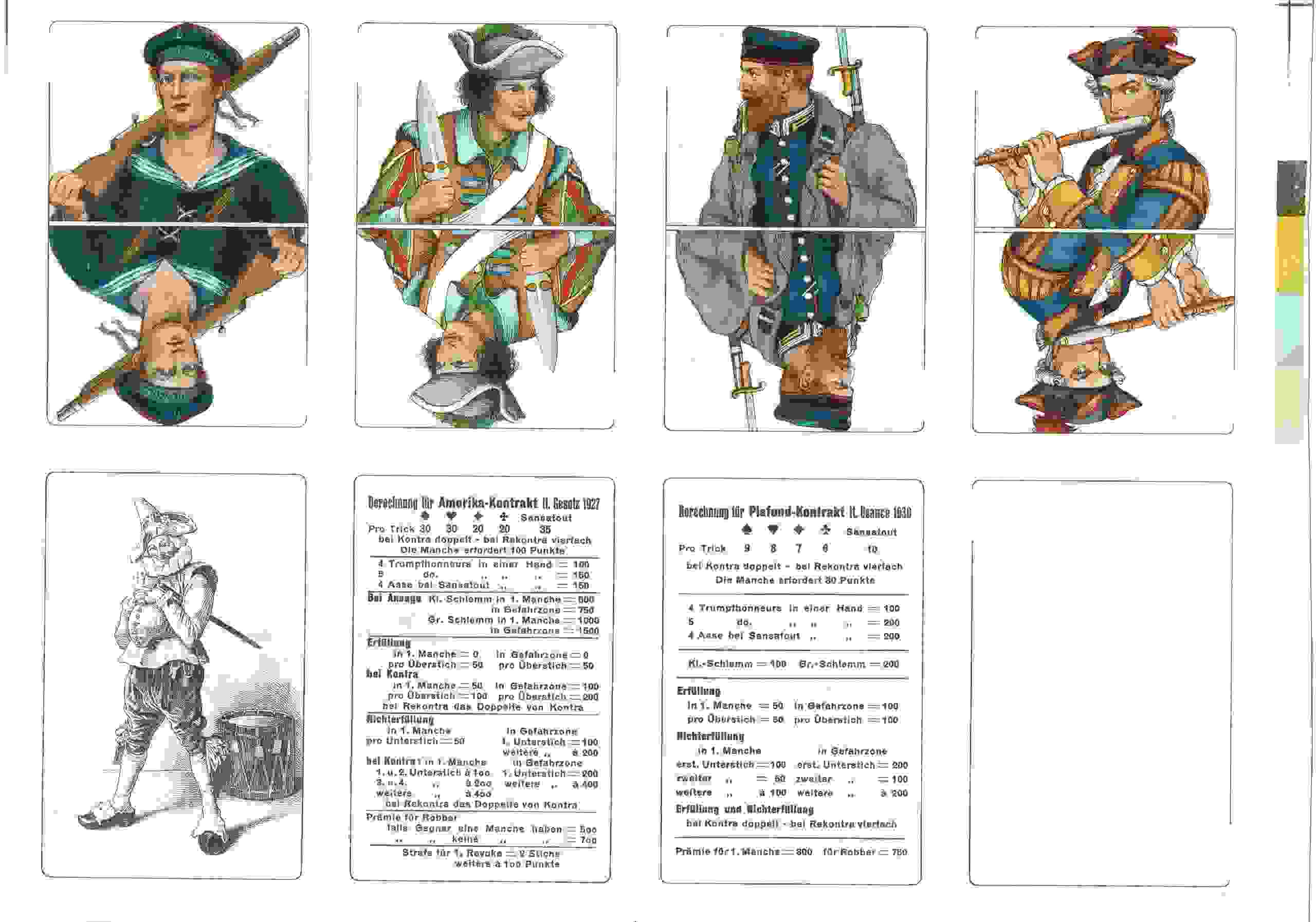 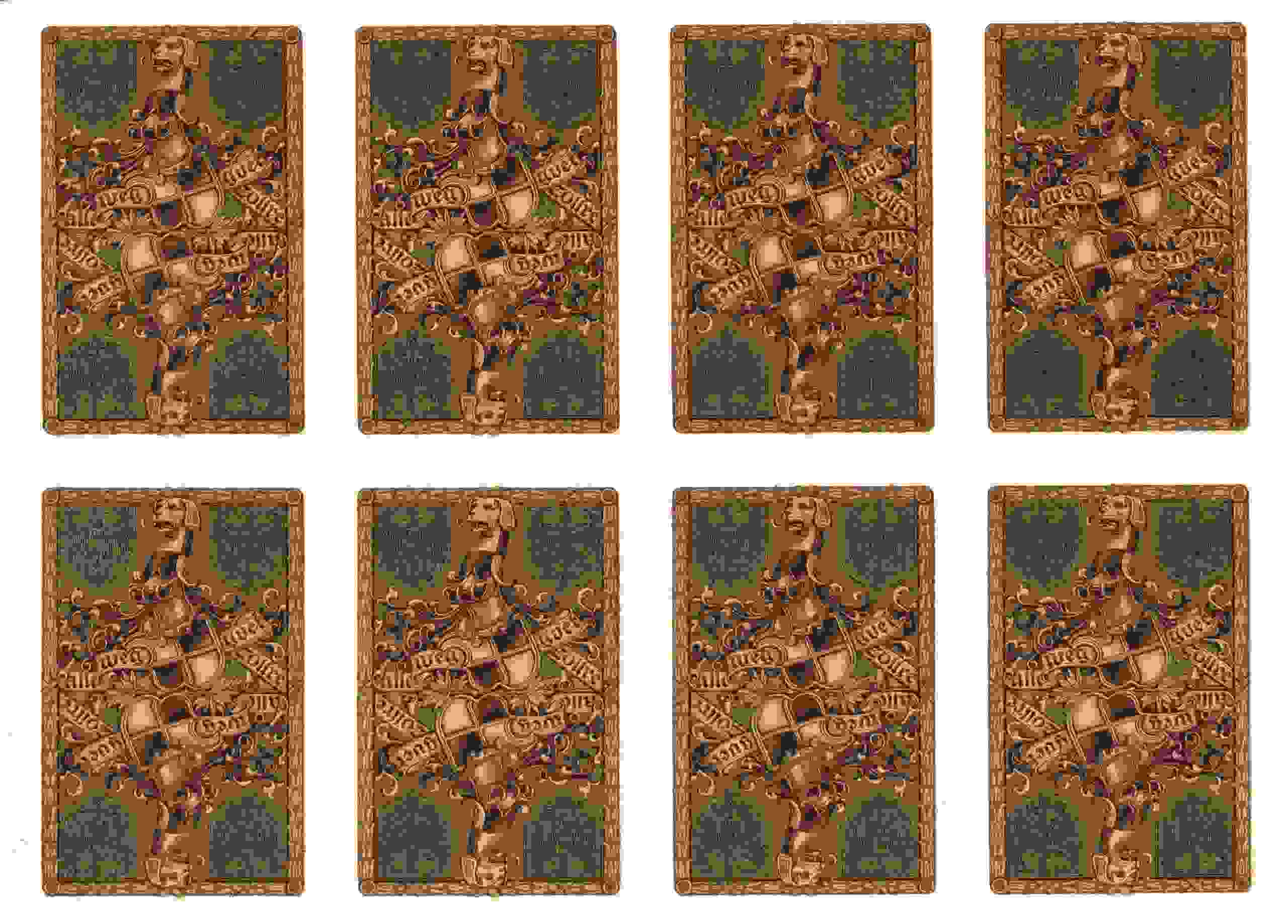 Makers name on the ace of spades, these cards are dated c.1932 and believed to have been on sale for a limited period between 1931 -1933. The cards have round corners, gold edges and 4 English index marks. The unusual back design in chromolithography is of a young costumed women holding a mask.

This is known as a 'No Revoke' deck. In order to avoid confusion the suit-signs of clubs and diamonds have a white border. The big index marks are below the suit marks in the corners.