a site for the playing card collector 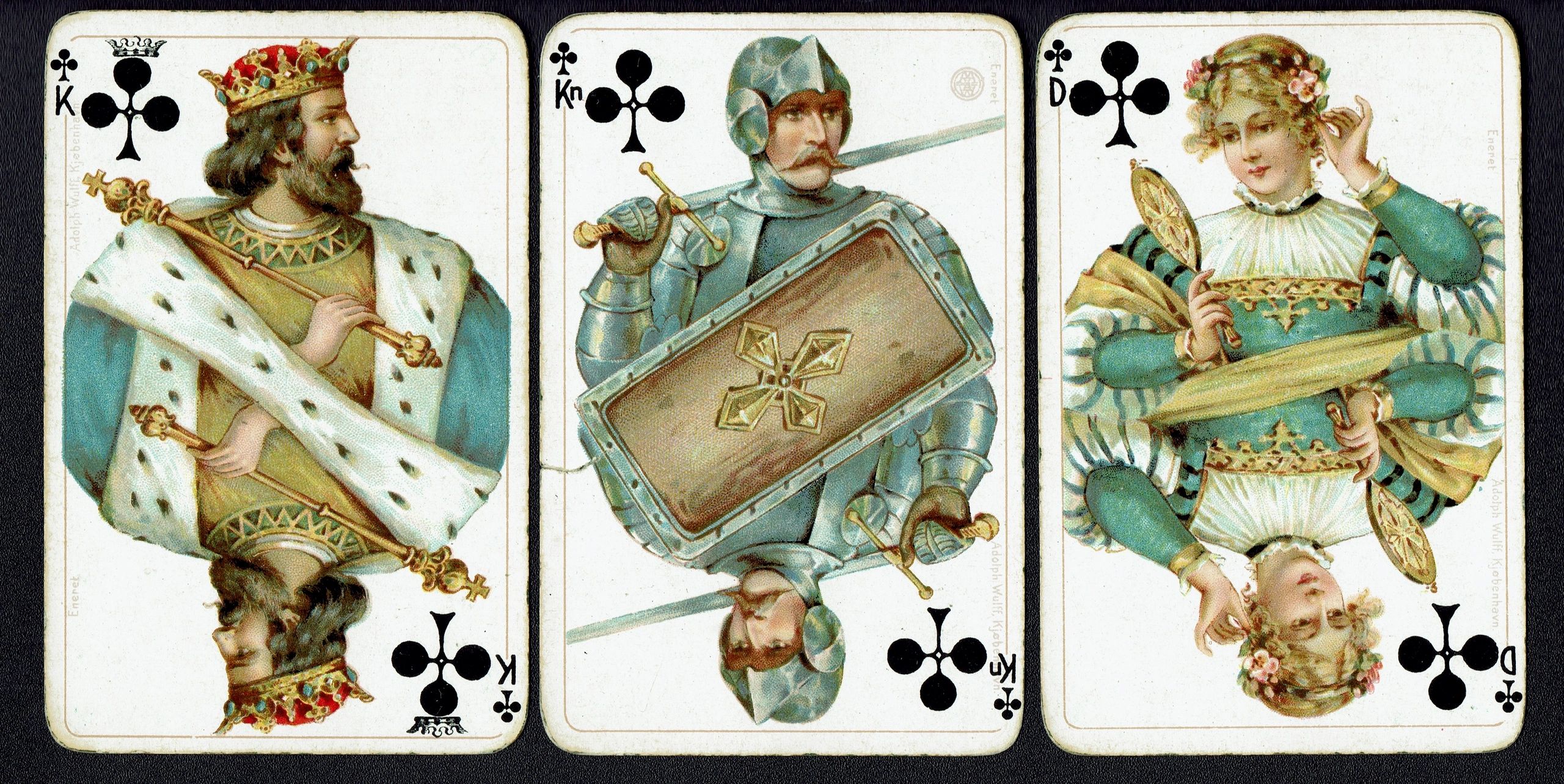 This site is for the playing card enthusiast and has been named after Bernard J. Dondorf who was born in 1809 and established a lithographic printing business in Frankfurt Germany 1833 which, amongst other items, printed playing cards. B Dondorf was arguably one of the finest printers of his era printing some amazing playing cards during the company's 100 year history. Ironically it was the quality and expensive production process that ultimately contributed to the the demise of the company in 1933.

Whilst Dondorf playing cards acted as the catalyst and inspiration for me to become a serious collector and remain my main passion, I have developed many new playing card related interests over the years and will share them with you on this website.

This site aims to showcase the very best in collectable playing cards and card games and to share information on the subject. There is also a blog reporting items of interest and details of any cards recently sold at auction, subscribe to receive regular updates sent by email.

Launched June 2018 I hope this site will develop progressively and prove to be of value to all who share in it.

How to identify your cards

What's in the news?

Card games that are a bit different

Despite collecting cards over many years I often come across cards that I struggle to identify.......your help required

The cards displayed above are from a deck believed to have been published in 1903 by an unknown maker, possibly De La Rue. The government at that time was wrestling with important issues such as 'tariff reform'

something which we are familiar with today.

A coalition of the Conservative and Liberal Unionist parties took power in the United Kingdom following the 1895 General Election. Conservative leader Lord Salisbury was appointed Prime Minister and his nephew, Arthur Balfour, became Leader of the House of Commons, but various major posts went to the Liberal Unionists, most notably the Leader of the House of Lords, the Liberal Unionist Duke of Devonshire, who was made Lord President, and his colleague in the Commons, Joseph Chamberlain who became Colonial Secretary It was this government which would conduct the Second Boer War from 1899-1902, which was exploited by the government to help win a landslide victory at the 1900 general election.

The government consisted of three ministries, the first two led by Salisbury (from 1895–1902) and the third by Balfour (from 1902 onwards).

Balfour succeeded Salisbury as Prime Minister in 1902. Eventually, the Unionist government would falter after Chamberlain proposed his scheme for tariff reform whose partial embrace by Balfour led to the resignation of the more orthodox free traders in the Cabinet.

In celebration of Queen Victorias's 200th birthday this year we look back at some of the interesting playing cards printed during her reign..

Victoria, born 24 May 1819, was the daughter of Edward, the Duke of Kent, fourth son of George III and Princess Victoria of Saxe-Coburg. Her father died before she was a year old and she grew up under the strict surveillance of her mother and governess.

Queen Victoria succeeded to the throne at the age of 18 on the death of her uncle, William IV in 1837 and took on her responsibilities with enthusiasm, guided initially by Lord Melbourne, the first of many able Prime Ministers.

The earliest playing cards with decorative back designs appear from c.1830 when Reynolds claimed to have the first which were printed in commemoration of William IV coronation in 1831. This design was to be re-issued by Reynolds again in 1863 to commemorate the wedding of Queen Victoria's son Edward, Prince of wales to to Alexandra of Denmark. The earliest cards I have been able to identify to be directly associated with Queen Victoria are the decks produced by De la Rue in celebration of Victoria's wedding in 1840 to Prince Albert of Saxe-Coburg-Gotha quickly followed by a deck also by De la Rue to celebrate the first born of 9 children to Queen Victoria on the 9 November 1841, the Future Edward VII.

The card to the left is taken from the Jaques game of Sovereigns of England and the earliest picture of Victoria from this published series c.1840.

A few notable events during the middle part of Queen Victoria's reign:

1851 - The Great Exhibition of 1851 was the world's first international exhibition. Conceived by Prince Albert to celebrate the Industrial Revolution, the venture proved a triumphant success. From the time it was opened by Victoria on 1 May 1851 to its closure on 15 October, more than six million people had visited the exhibition.  The exhibition was staged at Crystal Palace a purpose built building for the event consisting of over 300,000 panes of glass supported by cast-iron framework. Designed by Joseph Paxton it was erected in Hyde Park London in 1851. The vast interior of Crystal Palace provided space for some 13,000 exhibitors from all around the world, over half of whom were British. Playing card exhibits are known to have been present by at least two printers, Whitaker and De La Rue. Whitaker was to produce a deck in celebration of the Great Exhibition and had a picture of Crystal Palace on the reverse. Two variants are known one with a white background the second with a blue background.

De la Rue and its principal designer Own Jones was to create a set of 4 back designs each with initials of a member of the royal family against a background of flowers. The most commonly found is that of VR for 'Victoria Regina' the second is PA for 'Prince Albert'. The third and fourth decks are exceptionally are with PW for the 'Prince of Wales' and PR for the 'Princess Royal'.

1854 - 6 The Crimean war fought by Britain and France against Russia. Goodall celebrated the event with an early commemorative deck featuring a British & French soldier shaking hands.

Osborne House a private villa designed by Prince Albert in the fashionable Italian style was completed c. 1850. Situated on the Isle of White a small island off the south coast of England it provide Victoria and Albert a private and secluded spot for relaxing and entertaining.  Early in the afternoon of Monday 21 August 1854, a young Indian prince was steaming across the Solent. This was the Maharaja Duleep Singh, once the ruler of the Sikh Kingdom. Son of Ranjit Singh, the powerful 'Lion of the Punjab', Duleep had not been allowed to occupy his father's throne for long. At the age of ten, after a period of joint rule, he was deposed by the British. Now he was fifteen, exiled from his home and paying his first visit to the Isle of Wight. He would soon establish a strong friendship with Victoria. Reynolds published a deck of cards which were for export and showed a picture of Osborne house on the back.

After the early death of Prince Albert in 1861 Queen Victoria went into a long period of mourning and retreated from all public engagements for several years.

Commemorative playing cards continued to be issued with a set in celebration of Edward Prince of Wales to Alexandra of Denmark issued in 1863. In the photo gallery one such set was found in a box marked 'cards owned by Queen Victoria'. The cards issued by Reynolds have a back design believed to have been first issued for William IV coronation in 1831. The set re-issued in 1863 has colour added to the back design and is of a better quality. In 1874 De la Rue issued a deck commemorating the marriage of Prince Alfred, Duke of Edinburgh, with Princess Alexandra of Russia. On the aces and court cards European monarchs are shown. The backs are printed with the coat of arms of both parties.

In 1887 Victoria celebrates her Golden Jubilee and several decks of cards are issued in celebration of this event. One of the most interesting designs was done by John Leighton which details various events between the years 1837 - 1887 in a ribbon incorporated within the back design. Another less common deck found is one issued by Goodall with a back design showing Queen Victoria with one of her ministers holding a book on Law.

In celebration of the Diamond Jubilee in 1897 a plethora of commemorative decks were issued including many from overseas makers such as Dondorf and the New York Consolidated Card Company. In 1900 Queen Victoria makes a rare trip to Ireland and this is marked by a Deck issued by De La Rue and in January 1901 Queen Victoria dies at her home Osborne House on the Isle of White. Goodall re-issues the most common of all commemorative decks first issued in 1897 with the oval photograph of Queen Victoria by Bassano. The date was changed from 1837 -1897 to (1901).

General enquiry - Drop us a line!

If you wish to enquire about the availability of any playing cards or books for sale or have old / Unusual cards or games for sale then please contact us here.

I was familiar with the name of W Gurney Benham as author to the well known book 'Playing Cards' a History of the pack and explanations of its many secrets published in c.1931 but had not realised that he was born and bred in my Home town of Colchester and had been a past Mayor.

Sir William Gurney Benham, FSA, FRHS giving him his full title was born 16 February 1859 and died 13 May 1944. In summary, he was a newspaper editor, published author and three times Mayor of Colchester.

His first job was as a journalist in Wiltshire in 1881. In 1884 he took over the family printing business and began his 59 year editorship of the Essex County Standard. From 1892 to 1929 he edited the newspaper jointly with his brother, Charles Edwin Benham. He is now mainly known for his many publications, many of which are transcriptions of official documents from mediaeval times, particularly those related to his home town of Colchester. He also compiled a number of books of quotations. It was remarkable that he was able to collect and arrange some 50,000 quotations and proverbs. As a printer he had a strong interest in the history of playing cards and published two books on the subject;  'The History and Secrets of the Pack' and secondly 'A Short History of Playing cards'.

Colchester is famous for being the 'oldest Recorded Town in Britain' but also is well known for the Oyster Feast which is held annually in Colchester Town Hall.  I was fortunate to find on old Oyster Feast invitation and menu card at local antique fair for sale and was much surprised to see that W Gurney Benham was also a much accomplished artist. I have since discovered two further examples dated 1902 and 1936 both of which have excellent drawings by W Gurney Benham....

A mediaeval scene with lots of famous dinner party guests all with connections to Benham's home town of Colchester.

a selection of informative books and catalogues

A comprehensive guide to Waddingtons playing cards with back designs by William Barribal available as a free download - see below.

Is your collecting theme Royalty?

A comprehensive guide to playing cards issued by Waddington's with back designs by William Barribal.